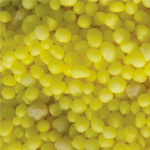 What is PARICH Nitro?

PARICH Nitro is a bulk blend fertilizer mixing 20% ammonium sulphate and 80% urea coated with N-(n-butyl) triophosphoric tramide (NBPT) which is a proven, highly effective coating agent to control nitrogen loss from urea due to volatility. By treating urea, NBPT makes volatilization virtually impossible for up to 14 days. It works by inhibiting the activity of the urease enzyme preventing it to change urea into the form of ammonia.

There are more than 1,300 researches performed on NBPT from many leading universities around the world to prove its efficacy and its environmental and health safety. By keeping nitrogen in the urea form longer, nitrogen losses from volatilization are minimized and seedling burn is reduced. Urea remains in a plant available form longer, so more of this vital nutrient is delivered to the trees.

In addition, it also contains 4% of sulfur, which is an important secondary nutrient. It helps with the formation of amino acids, proteins, and chlorophyll. Sulfur has become more important as a limiting nutrient in crop production in recent years. Therefore, the sulfur in PARICH Nitro can help farmers achieve higher crop yields. 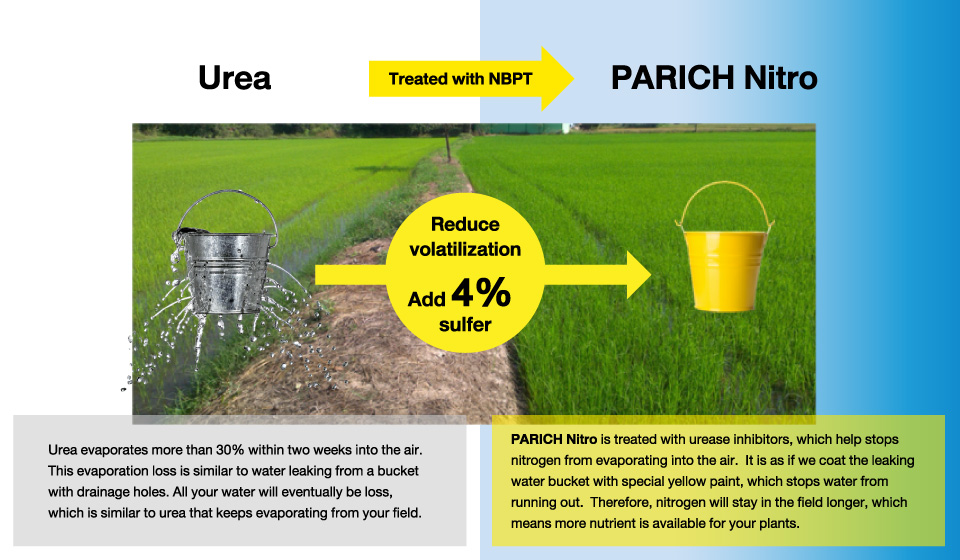 When urea is applied, urease enzyme breaks down the urea molecule (hydrolysis) into ammonia. Unfortunately, some of the ammonia is lost to the atmosphere as a gas in a process called volatilisation.

PARICH Nitro works by effectively inhibiting the activity of the urease enzyme preventing it to change urea into the form of ammonia. The process helps the soil to keep nitrogen in the form of urea longer. Volatilization loss is minimized and improve the fertilizer efficiency and improve yield! 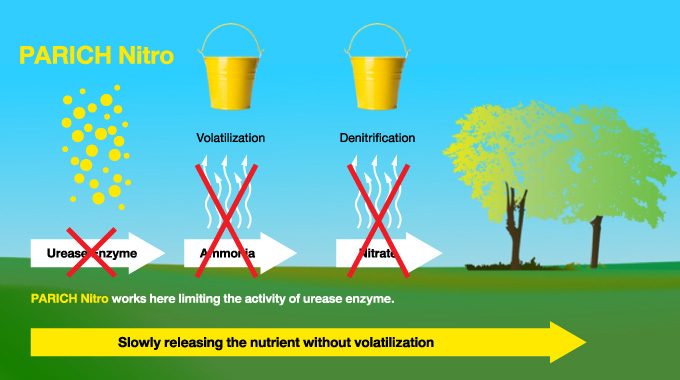 How is PARICH Nitro different from Sulfer Coated Urea (SCU)?

Sulfer Coated Urea uses sulfer to make urea to become slow release (slowly dissolved). Form this point, urea will be kept in its original form to avoid transformed into NO3 and then to N2 to evaporated into the air (cause N loss). On the other hand, the working mechanism of NBPT is totally different. It is urease inhibitor, which means it will keep the enzyme urease away from attacking urea to transform urea into NH3 and form this point NH3 will evaporate into the air. It does not create a physical barrier around the urea granule and therefore does not restrict N availability to the plant at early stages of plant development. 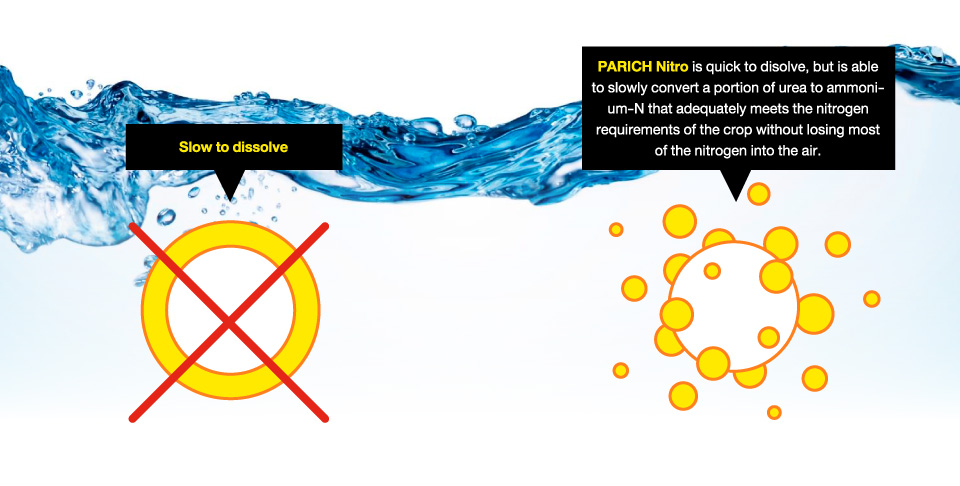 Why is sulfur important?

PARICH Nitro contains 4% of sulfur, which is an essential nutrient for plant growth. In recent years, it is considered to be as important as phosphorus and is sometimes called “the 4th major nutrient”.

Sulfur has many functions in plants. About 90% that is absorbed by the plant is used in the formation of amino acids, the building block of proteins. It is also necessary for chlorophyll formation, promotes nodulation in legumes, and is essential in the synthesis of oils. These functions are closely related to the function of nitrogen, therefore the crop’s need for nitrogen is closely related to the need for sulfur. Crops that require high level of nitrogen usually require more sulfur as well.

Because it is very soluble and is easily leached out of the root zone, it has become more important as limiting nutrient in crop production. Soil conditions where sulfur is most likely to be deficient are low organic matter levels (usually below 2%), sandy texture with good drainage, and high rainfall conditions.